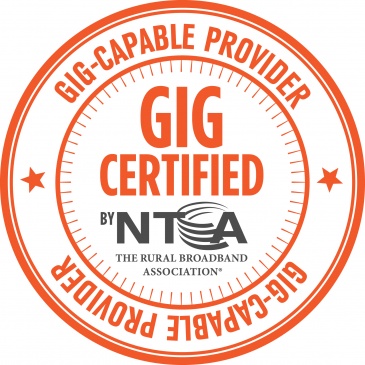 As a Certified Gig-Capable Provider, Rainbow Communications joins a national campaign to build awareness and industry recognition of community-based telecom providers that have built communications networks capable of delivering Internet speeds of up to 1 gigabit per second, which is 100 times faster than those currently available in many U.S. households.

“I applaud Rainbow Communications for its commitment to delivering the Internet’s fastest speeds—an accomplishment worthy of much praise considering the unique and challenging circumstances small, community-based telecommunications providers operate under every day in serving some of our country’s most rural and remote communities,” said NTCA Chief Executive Officer Shirley Bloomfield. “By building a gigabit-capable network, Rainbow Communications has not only overcome these challenges, but also shattered conventional benchmarks for broadband speed to enable cutting-edge technologies that drive innovation and promote economic development in their communities, region and nationwide.”

To achieve certification, telecommunications companies must show that gigabit technology is currently commercially available within 95% of one or more exchanges within its serving territory and that such service can be provided without new trenching or stringing new aerial facilities. This statement must be confirmed by a letter from an engineering firm or other independent source involved in the company’s network planning, deployment or operation.

More information about the NTCA Gig-Capable Provider certification program is available at www.ntca.org/gigcertified.